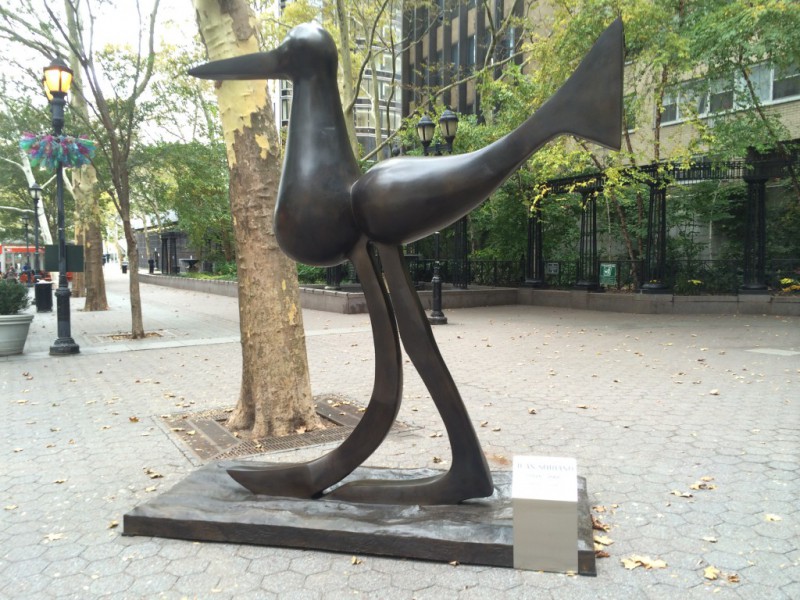 One of Mexico’s most important modern artists, Juan Soriano (1920–2006) served as a link between the nationalist imagery of the Mexican muralists and the experimental vanguard of the 1950s and 1960s known as “La Ruptura.” He is classified as part of the second wave of the Mexican muralism movement. The artist’s prodigious body of work includes painting and portraiture, illustrations, costume and set designs, puppetry and ceramics. He began to create large public sculpture in the 1980s and moved increasingly toward abstraction.

Marek Keller, Soriano’s longtime partner and director of the Juan Soriano Marek Keller Foundation, was present at the installation and related a story that Soriano had shared with him: As a 10-year-old child Soriano’s father, a veteran of the Mexican Revolution, exhorted his son into firing a pistol. It was the masculine thing to do at that time and place. With dead aim on his first shot he brought downa bird perching in the backyard. He was not proud of his kill and according to Keller, was so affected he became sick and took to his bed. One of Soriano’s most famous paintings, Child with Bird (1941), shows a live bird nestled in the hands of a young boy who, if not smiling, appears quizzical.

The imagery of birds and of other winged creatures is only one thread in a rich variety of themes and ideas that Soriano explored.

At the age of 15, his exhibit of paintings at the Guadelahara Museumwas seenby Lola Alvarez Bravo and Maria Izquierdo, who encouraged the child prodigy to move with his older sister, Martha, to Mexico City. It was 1935. Despite fragile health, the young artist produced numerous paintings rife with imagery of death, flight and eroticism. His work was acknowledged as strong and hauntingby many in the vibrant intellectual scene fueled by the Mexican muralists Diego Rivera, David Alfaro Siqueiros and Jose Clemente Orozco.Soriano’s creative genius encompassed the worlds of theatre, poetry, and the visual arts. His friends and influences included Frida Kahlo and Lupe Marin, among many others. Novelist Carlos Fuentas and the celebrated poet Octavio Paz wrote about him.

A free spirit, Soriano eventually quit the League of Revolutionary Writers and Artists and distanced himself from the political art of the Mexican muralists, claiming their style was overly didactic, even dogmatic. His own work is introspective and has been called “romantic realism.”

His forms on display areeloquent and serious, but also humorous. Edward Sullivan, a preeminent historian of Latin American art, characterized the sculptures in the Plaza as“imposing yet restful” with themes both “personal and universal.”

During his career, Soriano created a number of monumental sculptures which can be found in Mexico and Europe. These include El Toro at the TomásGarridoCanabal Park in Villahermosa (1987), La Paloma at the MARCO Museum in Monterrey (1989), La Ola for the World Trade Center in Guadalajara (1989), El Caracol for the Amparo Museum in Puebla (1989), La Luna for the National Auditorium in Mexico City (1993), La Sirena for Plaza Loreto in Mexico City (1994),Dafne for the Arcos-Bosques Building (1995), Mano for the Herdez Group headquarters (1995), two sculptures for the Expo Hannover 2000 in Germany, six monumental sculptures for different parts of Mexico in 2003 and several of his works can be found in a park in Warsaw, Poland.

The organizers and sponsors of the exhibit include Ambassador Sandra Fuentes, Consulate General of Mexico; the Mexican Cultural Institute of New York; The Juan Soriano and Marek Keller Foundation; Nino de Rivera Communications and World Peoples for the United Nations.