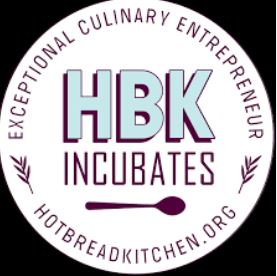 It is lunchtime on a Wednesday in late May and Dag Hammarskjold Plaza is bustling with activity as people browse the farm stands, a cornucopia of culinary possibility. At Hot Bread Kitchen Jessica Dragonetti is helping customers navigate their many offerings. A well- dressed man, who looks to be of Middle Eastern descent with a lanyard bearing a UN ID card across his chest, steps up. “I’m looking for bread,” he says.

“You’ve come to the right place. What kind of bread?” she asks.

“Regular white bread,” he responds. By the time Dragonetti is finished, he has selected two very crusty chapati; two healthy slices of focaccia wafting with the buttery fragrance of olive oil, and a French baguette.

“Would you like a bag with a handle?” she asks. With bag in hand, he walks toward First Avenue, another satisfied customer.

From Indian nan to Iranian nan-e-barbari; Polish bialys to challah; and New York rye to sour dough with olives, the women bakers of Hot Bread Kitchen produce a wide variety of international multi-grain breads to intrigue and entice any dough-loving palette. Their baked goods are a mini-United Nations of authentic traditional and ethnic breads. Depending on availability, ingredients for all bakery products are grown locally and are organic whenever possible.

Hot Bread Kitchen has rolls galore. Mexican conchas come with either chocolate or vanilla icing. Armenian crackers, called lavash, are available by the box. A paper thin Moroccan m’smen might serve as a wrap for any creative filling, or can be eaten in the traditional way, heated in a dry skillet, then drizzled with honey and enjoyed with a cup of Moroccan mint tea. A New York version of the m’smen, with kale, onion and New York cheddar, is also available.

The nixtamal has been a landmark staple of Hot Bread Kitchen since the bakery first opened in 2008. There are three varieties, yellow, white and blue. All corn is organic and non-gmo. The yellow corn is grown in New York State, while the white and blue corns are from the mid-west. To make the nixtamal, the corn sits for hours in a bath of water and lime mineral called calcium oxide until it breaks down into masa, then it is formed by hand before being smashed into its flat tortilla state.

The mission of Hot Bread Kitchen is about more than selling bread; it is a social enterprise that helps low-income immigrant and minority women learn to be professional bakers. In 2008, CEO, Jesamyn Rodriguez, a former United Nations policy expert, began the organization to address workforce inequity and create jobs. At their bakery in East Harlem, they train approximately 30 women each year. After the completion of a nine-month course, Hot Bread Kitchen helps their graduates find employment. Recent graduates are working in restaurants like Danielle’s and bakeries like Bien Cuit and Amy’s Bread. The women selected to be trainees have a passion for cooking and baking and are ready to take their talents to a new level. Often trainees bring their recipes with them, hence one reason for the wide variety of breads at Hot Bread Kitchen.